I am the Resurrection

I have been involved in many conversations of deep hurt the last week. I have felt overwhelmed.

I have been in many conversations about ministries (church and non-church) experiencing formlessness and void, crisis about the future. I have felt overwhelmed.

The world is experiencing much violence and fear from every side. I have felt overwhelmed.

Today, in the dark sanctuary of my congregation, light was shining through the stained glass windows and they are wonderfully designed such that the window for “I am the Resurrection” is 10x brighter than any other window. Dazzlingly bright. (I cannot do it justice here but I have tried with a couple of phone pictures.)

The window spoke to me. Is speaking to me.

Do not fear.
Be still.
I have come to give you life.
You are not alone.
You are my beloved.

I am the Resurrection. 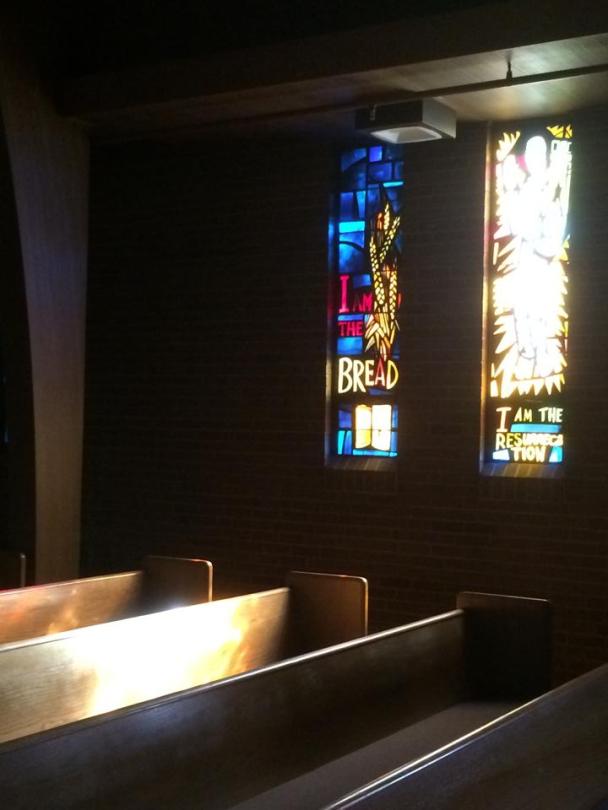 The Cross Must Come Down!

I read this article earlier about a judge ruling that a cross as a war memorial must come down (http://huff.to/1cG6ivo) and I can imagine the outrage among some Christians about this “persecution.” As if there aren’t much greater and more horrific things for us to get un/righteously upset about.  So I had this provocative idea to add a bit of perspective to this.  You see just like the Puritans are the only people who really ever staged a war on Christmas (they actually made it illegal because they saw it detracting from faith not celebrating it) the Church also has its own history of waging a war on the cross.

That’s right: meet John Calvin.  Mostly folk love him or hate him – I have a rather nuanced appreciation for him myself and while we are quick to dismiss him it should probably be noted that Karl Barth (much more widely adored by 20th century Reformed Theologians like Presbyterians) who himself had issues with Calvin also had this to say of him.

Barth was confronted with the disturbing strangeness of Calvin’s theology. As he famously expressed in a 1922 letter to his lifelong friend, Eduard Thurneyeson:

Calvin is a cataract, a primeval forest, a demonic power, something directly down from the Himalayas, absolutely Chinese, strange, mythological; I lack completely the means, the suction cups, even to assimilate this phenomenon, not to speak of presenting it adequately….I could gladly and profitably set myself down and spend all the rest of my life just with Calvin.

So why do I bring Calvin on the scene?  Because Calvin waged a bit of his own war on the cross.  Removed them all in fact from the sanctuaries in which he worshiped.  Of the Cross as decoration he had this to say (in the midst of larger rant about images in churches, and I added a coupe or three parenthetical thoughts of my own):

I still cannot see what benefit such images (not yet talking about crosses but about Christian works of art in worship spaces) can provide for the unlearned… except to make them into anthropomorphites, {i.e. people who humanize God}.-Indeed, brothels show harlots clad more virtuously and modestly than the churches (he doesn’t mince words does he?) show those objects which they wish to be seen as images of virgins.-But then we shall also answer that this is not the method of teaching the people of God whom the Lord will to be instructed with a far different doctrine than this trash (no he doesn’t at all).  He has set forth the preaching of His word as a common doctrine for all.-From this one word they could have learned more than from a thousand crosses of either wood or stone.-Therefore, He will vindicate His majesty and glory against any who may transfer it to graven images or other things.  And not once, but against fathers, the children and the grandchildren. (1536 Institutes of the Christian Religion, p.21)

That’s right.  John Calvin was a remover of crosses.  A remover of all religious imagery.  John Calvin was a word guy of course (and a Word guy as well).  He probably would have greatly struggled in this image driven world we live in today.  Not probably – he would have – but lucky for him he’s 500 years dead.  However…. like Barth we could use to spent some time with Calvin’s thoughts on this subject.

It is okay to be image driven – but not image fixated.  Jesus story was about the word made flesh – not the word turned into a wood/stone/metal image that does our witness for us.  Let the cross be take down – its our lives that are meant to be speaking this story.  Paul Ricoeur’s great work on symbols reminds us that they only have meaning when they are embedded in the story from which they are birthed.  A cross has no meaning by itself, and as Calvin would be quick to remind us it actually becomes but a graven image when it no longer reflects the story from which it speaks.  And so Calvin stripped the cross out of his worship – crosses that had become bereft of their deeper meaning – to get us back to the story, the good news, the word made flesh.

Jesus sits at a meal and breaks bread and says, “when you do this, remember me.”  Too often today we wish to leave our remembering, and even our doing, to static symbols, buildings, and platitudes.  In a season of Advent what I am always reminded of the most is that we are called to, awaiting, participating in an incarnational ministry.  “The word became flesh and lived among us.”  And we became the word and went into the world.

Let the crosses come down; and let us live the cross in our lives.