Faith and Politics: When Preaching Gets to Meddling

Today a friend made an off-hand comment that went something like, “Andrew is one of the most political pastors I know.”  He didn’t mean it negatively.  It was just an off-hand comment in a conversation about non-profit work.  But the comment stuck with me.  Am I really that political?  I don’t self-identify as such, and yet… I don’t have a problem with that identity.  Because you know what?  I think faith is necessary political.  In fact it kind of drives me crazy that people think they are two things that should remain separated.

Clarifying terms for a minute.  I am not talking here about the separation of Church and State.  Keeping those two institutional structures separated is a value I highly prize.  But faith and politics?  Those aren’t institutions or structures… they are, in a nutshell, worldviews.  And they cannot possibly remain separated if you are at all serious or committed to either one of them.

When a Buddhist maintains that all life is inter-connected and thus compassion should be the default engagement with all other life (alongside non-attachment) this is setting up a way of relating to the world that will necessarily alter their political choices.  Their politics and the choices they make about what would be “right” orientation to societal problems would have to flow out of their core faith values.  You don’t find a whole lot of militant Buddhists… because its hard to have a core value that claims my life is no more important that the life of the tree… the sparrow… or those other people over there, and defend a political choice to go to war.

In the three and half years I have been in my current call I have been mostly blessed with few people who really complain about my preaching… I presume they are listening but maybe that’s the key. 😉  But three instances that come immediately to mind were all when my sermon touched on political issues.  One such time I was outright told that I was to talk about scripture not politics…. right after I preached Ezekiel 34.  A chapter that is a prophet addressing the political leaders of Israel with rebuke for not doing their job protecting the weak and feeding the people so that the people became scattered and food for wild animals.  Now mind you… what Ezekiel says is shepherds and sheep.  So maybe there is some reason for confusion, but Shepherds in the Old Testament are Kings.  And we are the sheep.  And the Old Testament is time and time again… political.

So my argument then, and my argument now is this…. I cannot preach scripture without getting political.  If I am to do my job, as given to me by the very person complaining about “getting political” it would be to “get political.”  Because God is all about politics.  God has a political vision for the ordering of creation and human society within that creation.

Now, maybe someone is waiting to say, but Jesus….

I come from a confessional tradition.  We have creeds and catechisms that teach the faith. The earliest two we use in our Book of Confessions are the Nicene Creed and Apostles’ Creed.  But they aren’t really the first confession of the Church.  The first two creeds go farther back than that.  The first two (unofficial) creeds of the emerging Christian Church were:

But the other “first” creed, Jesus is Lord?  It is a political statement.  In a world where Caesar was Lord it stands as a contradiction – an opposing political party if you will.  It means Caesar isn’t Lord.  The way of Caesar and Empire are not the worldviews we choose… Jesus is the way.  You cannot follow both Jesus and Caesar.  Their “ways” are too disparate. So to become a Jesus follower is to necessarily make a political statement… one that cost many of those early followers their lives.  Someone look Peter or Paul in the eye and tell them faith isn’t political.

There is an old phrase that goes something like, “now your preaching has gone to meddlin’.”

I love the phrase.  I love it because preaching is ALWAYS meddling.  God is an imposition on our lives.  My life would be easy without Jesus.  Less meaningful for me?  Yes.  Better?  Not as I measure it now.  But it would surely be easier.  Because when I try to make Jesus’ politics my politics it forces me to meddle in the world in ways the world doesn’t appreciate.  Sometimes in ways even our own families and friends don’t appreciate.  But can we seriously call ourselves followers of faith (any faith, mine just happens to be in the way of Jesus) without allowing the truths that faith claims for us to pervade all our decision making… particularly our politics?

I will always try hard not to give answers.  I don’t it see it as my role.  I believe my role is provoke with good questions and train people with the tools for coming up with answers.  I hope to help people learn to connect the dots for themselves and to raise moral awareness of our choices and their consequences.

I will never say who you should vote for or even judge your choices (that one gets harder for me, I’m fallible and it isn’t easy).  But please, never tell me our faith isn’t political.  If you have made a political choice, I hope it reconciles with what you preach and pray and read and learn in your faith life.  It isn’t a matter of should… it’s a matter of ought.  Because if you really think your faith isn’t political than my response would be… you aren’t a person of faith.  I don’t mean that as a judgment of you, but a statement of what those terms really mean.  And to clarify further that doesn’t mean you aren’t a good person… I know lots of good people who self-identify as not being people of faith.  But I have a stake in asking you not to claim what isn’t true.  You cannot be a person of faith and keep that faith out of your politics because to be a person of faith means to passionately ascribe to a world view that has call on how we behave in the world.  And that is the exact thing that politics is doing.

So, people of faith?  Get political! 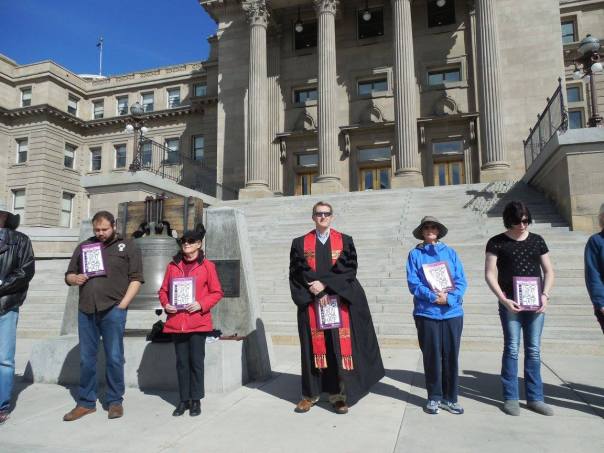 This picture makes me laugh – that’s me in the robe yesterday looking like a Secret Service Agent for God as I was standing outside the Capitol advocating for people  – because my faith makes me pro-people and Idaho needs to be too great for hate!  Thanks to the great people of the Interfaith Alliance and the Interfaith Equality Coalition for continuing standing up and being political because of, and informed by, our varying faiths.

I am the proud father of four wonderful children, loving husband to Caroline, brother to three mostly wonderful sisters, and son of two parents that gifted me with a foundation of love and freedom. I also am a Presbyterian pastor and former philosophy major with a love of too many words (written with many grammatical errors and parenthetic thoughts), Soren Kierkegaard, and reflections on living a life of discipleship that is open to all the challenges, ups and downs, brokenness and grace, of a chaotic and wonderful life founded upon the love of God for all of creation.
View all posts by Andrew Kukla »

Posted on March 3, 2016, in Uncategorized. Bookmark the permalink. Leave a comment.